The Danger of Daily Aspirin

If you're taking a daily aspirin for your heart, you may want to reconsider.

For years, many middle-aged people have taken the drug in hopes of reducing the chance of a heart attack or stroke. Americans bought more than 44 million packages of low-dose aspirin marketed for heart protection in the year ended September, up about 12% from 2005, according to research firm IMS Health.

Now, medical experts say some people who are taking aspirin on a regular basis should think about stopping. Public-health officials are scaling back official recommendations for the painkiller to target a narrower group of patients who are at risk of a heart attack or stroke. The concern is that aspirin's side effects, which can include bleeding ulcers, might outweigh the potential benefits when taken by many healthy or older people.

"Not everybody needs to take aspirin," says Sidney Smith, a professor at the University of North Carolina who is chairing a new National Institutes of Health effort to compile treatment recommendations on cardiovascular-disease prevention. Physicians are beginning to tailor aspirin recommendations to "groups where the benefits are especially well established," he says. 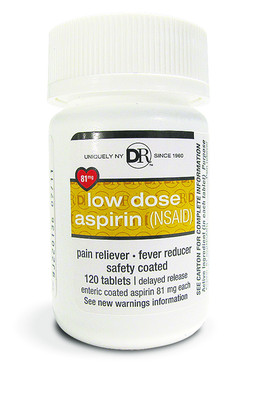 Doctors generally agree that most patients who have already suffered a heart attack or ischemic stroke, the type caused by a clot or other obstruction blocking an artery to the brain, should take regular low-dose aspirin. But for people without heart disease, the newest guidelines from the U.S. Preventive Services Task Force spell out much more clearly than before when aspirin should be administered.

The guidelines, announced last year, suggest aspirin for certain men 45 to 79 years old with elevated heart-disease risk because of factors like cholesterol levels and smoking. For women, the guidelines don't focus on heart risk. Instead, the task force recommends certain women should take aspirin regularly if they are 55 to 79 and are in danger of having an ischemic stroke, for reasons that could include high blood pressure and diabetes.

The panel urged doctors to factor in conditions that could increase a patient's risk of bleeding from aspirin, which tends to rise with age. The group didn't designate a dose, but suggested that an appropriate amount might be 75 milligrams a day, which is close to the 81mg contained in low-dose, or "baby," aspirin. The task force didn't take a position on aspirin for people who are 80 and older because of a lack of data in this age group.

Doctors have been scaling back their aspirin recommendations for people who don't already have heart disease. Here are the current guidelines from the U.S. Preventive Services Task Force.

Aspirin not recommended for:

Other medical researchers dispute the idea that there should be different guidelines for men and women. Still, many experts agree that doctors may have been recommending aspirin to people for whom the risks might outweigh the benefits.

Aspirin acts as a blood thinner, which is believed to account for much of its benefit of protecting against heart attacks and strokes. But that same action, along with a tendency to deplete the stomach's protective lining, can lead to a danger of gastrointestinal bleeding and possibly bleeding in the brain.

The task force issued its latest guidelines after reviewing the evidence from a number of studies on aspirin's benefits and risks. The recommendations update the panel's previous guidelines from 2002, which were more broadly written. Those suggested aspirin use for people of any age who were at elevated risk of heart disease.

"We would like doctors to re-look at their patients who are on aspirin and consider recommending stopping it where the chance of harm outweighs the benefit," says Ned Calonge, a Colorado public-health official who serves as the task force's chairman. He notes, however, that in studies of healthy people taking aspirin, the actual rates of bleeding and of prevented heart attacks were very low.

Not all patients accustomed to taking aspirin will want to stop. Maxine Fischer, 55 years old, recently figured out that under the new U.S. guidelines, she wouldn't be encouraged to continue with the drug. Using an online calculator, which factored such data as her age, blood pressure and medical history, she learned she had just a 1% likelihood of a stroke in the next 10 years. Under the guidelines, only women in her age group with at least a 3% or higher stroke risk should take aspirin.

Ms. Fischer, who works as a manager for seniors' lobby AARP in San Diego, has taken aspirin daily for two years after reading it could reduce the risk of stroke. For the moment, she says she'll keep it up, partly because she's more worried about strokes than ulcers. Strokes are "the big scary thing," she says.

Other patients say they would stick with aspirin because of other benefits attributed to the drug; past research has suggested that regular aspirin may reduce the risk of colon cancer, for instance. Virginia Douglas, 64, a retired trade-association executive, takes aspirin a few times a week. In addition to the possibly reduced risk of stroke, Ms. Douglas hopes to avoid colon cancer, which affected her father and grandfather. "There's always a new study with a new recommendation," says Ms. Douglas, of Sacramento, Calif. "You have to do what's best for you."

In a separate analysis, published in medical journal Lancet last May, an international group of scientists reached a broadly similar conclusion as did the U.S. task force—that doctors may have been recommending aspirin too widely. "You really have to have a clear margin of benefit over hazard before you should be treating healthy people," says Colin Baigent, a professor at Oxford University who coordinated the Lancet analysis.

Aspirin's effects in the body can have good and bad implications.

What You Can Do

If you want to figure out if the newest guidelines recommend aspirin for you, here's where to check:

Still, the Lancet authors disagreed with the U.S. panel on some important details, particularly about who should be taking aspirin. The two groups examined evidence largely from the same studies of the drug, although the international team analyzed the data differently. In the end, the international team of scientists, unlike the U.S. officials, concluded that aspirin's effects on men and women were mostly the same.

Another disagreement between the two groups also emerged: The U.S. task force said that age is the biggest factor determining a person's risk of internal bleeding from aspirin. But the international team said other factors, such as diabetes and high blood pressure, also play a significant role. Unfortunately, the scientists noted, the same factors that increase patients' risk of bleeding also increase their risk of developing heart disease. This, in turn, can make it more difficult to calculate whether the benefits of aspirin would outweigh the risks of side effects.

The U.S. task force responded with a letter to the Lancet, defending its finding that men and women's results did appear different. There is a "wealth of evidence that men and women have different cardiovascular disease manifestations and respond differently to aspirin," the letter said. The panel also reiterated its position that bleeding risk is best parsed by age.

Amid the debate, some individual doctors are finding their own position. Rodney Hayward, who codirects a Veterans Affairs research center in Ann Arbor, Mich., says he's not convinced that aspirin's effects on men and women are so different. He says he continues to recommend aspirin for certain patients of both sexes with significant heart risk.

What are the Longest-Lasting Batteries?

What are the Longest-Lasting Batteries?

Store brands may save you money on household necessities, but generic batteries might not be your best bet, according to recent tests comparing name brand and store brand batteries.

And rechargeables like those made by Energizer and Duracell could be your best bet for use in digital cameras and favorite toys, Consumer Reports suggests.

For remote controls, flashlights and other devices, alkaline batteries might be your best bet since their charge could last you several years, while rechargeable ones can lose their charge over time, as MainStreet previously reported.

Consumers may not want to rule out store-brand batteries completely, however. Kirkland Signature AA batteries, sold at Costco only in packs of 48, lasted nearly as long as the Panasonic batteries, according to Consumer Reports.